This was quite a "tour-de-force" for one week.

My filmjournalist buddy, Uwe Lippick made it possible to interview Wolfgang Petersen in Santa Monica. On a short notice and pretty spontanious we flew for one week to the USA. Because all flights to L.A. were booked, we flew to Phoenix and planned our rout in the plane.

The tour already took a dramatic start, when a family was asked to leave in Frankfurt. I didn't got the details, it was about wrong seats and the man got aggressive. Because of thunderstorms the plane couldn't land in Chicago and was running out of gas. So, we landed in Milwaukee for refueling. I don't have to mention that we missed our connecting flight to Phoenix. 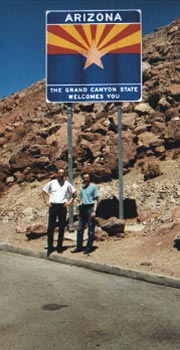 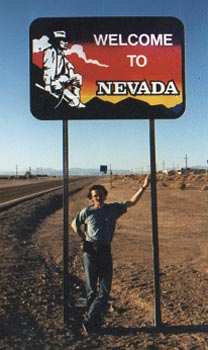 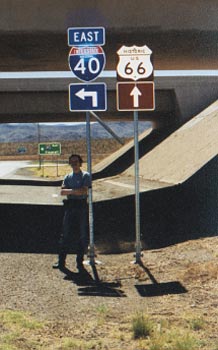 We still made it to Kingman, AZ our first stage for that day and had in return a flat tire the next morning. The car wasn't fully equipped with tools. So we had to call a repair shop to fix it. The spare tire was only an emergency tire. No way we could go on with that thing. That's why we had to stop in Las Vegas ( via. Boulder / E.J. Hoover dam) to change the car. Originally, we only wanted to pass Vegas. This cost us half a day, including getting lost in this phony desert town. 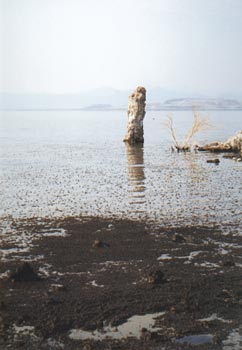 Next next day we drove through Death Valley at 45°C with a short stop in Lone Pine, where all the Western were shot. Sadly, the bookshop with all the movie- and western books were closed. In a god-forsaken place named Beatty we took a room for the night.

On with the show to Lake Monokee with its interessting stoneformations and millions of saltflies that covered the shore in big, black clusters. After tis pit stop to the other side through Yosemite Park. We misjudged the distance of this daily route, because the street had so many turns, up and downs that wasn't shown in our map. Very late and exhausted we took the first hotel after the park in Groveland. That was a doll house with a teddy bear on the bed, no TV in the room, everything furnished in a late 19th century style ...and quite pricey. On the other hand, it was a welcome change after all the shabby desert villages with run down motels and nothing but chemical junk food. The folks were very nice and invited us for a beer and we had a REAL breakfast the next morning!
American food habits - I'll never get used to that. I'm certainly no "gourmet" or something, but dried milk and foam rubber bread - I don't no. Uwe even had more problems with the food than me. I can take a few punches.

Next stop was San Francisco where we spend two days. SF is so far my favorite American city. it has an own style and seems to more "relaxed" than other cities.
We visited the Golden Gate Bridge, Fishermans Wharf and raided the book- and comic shops in those two days. In the US you find for every special interest books, documentation, etc. Each cult-movie or genre are featured. Getting those things in Germany is so difficult and expensive. We were like 6-years old in a candy store. 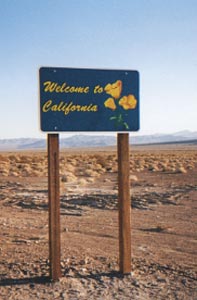 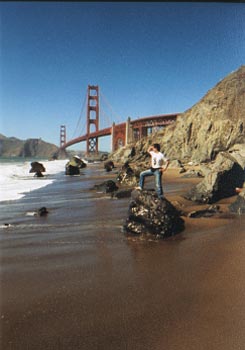 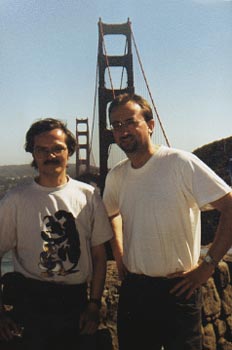 Next next day straight down to L.A. on the highway. Our date with Wolfgang Petersen was scheduled for 4.00 p.m. in his office in Santa Monica.
So far so good. What our L.A. map didn't pictured, was that the avenue where the office was located, was a few times interrupted! We had to find 914 and we were somewhere at #11.000! The scale of the map was too small. After a while we were lost in L.A. In our desperation - it was 4.30 by now - we saw a woman with a mobile phone (European and American cell phones use different techniques and therefore doesn't work oversea). Uwe scrambled out of the car and borrowed the phone to call the office. Our interview was rescheduled for 3.30 the next day. Now we had all the time in the world. We spend the rest day, after we found the office in Santa Monica. More book- and comic-shops to check out! In the late evening we went to see "Ghost of Mars". Oh, no! What was in John Carpenter's mind this time? I'm sorry to say it, but the movie is pretty bad.
The next day, everything went just fine. 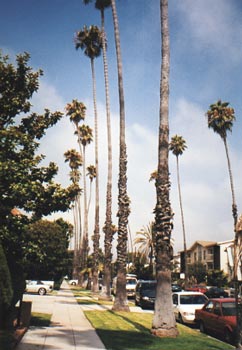 We were on time and spend one hour with Wolfgang Petersen in his office, having coffee and talking about his latest project, future plans and life in the US in general. He doesn't like taking pictures of him. You need a special agreement for this. So, no pictures of me with Wolfgang or pictures of his offices with family photos on the wall and cool memorabilia of his films.

After the interview we drove back and made it to Blythe, CA, a few miles before Phoenix.
Left and right of the lanes of the highway, the ground is covered with leftovers of exploded tires and sometimes even parts of wrecks. You constantly saw skid marks ending into nowhere. This was like corpses of past battles and tragedies to remind the living of the danger. Just like to underline my observation, we were stuck in a traffic jam on our way back to Phoenix, because of an accident. This didn't looked very good for the inmates. The cabin was completely crushed. 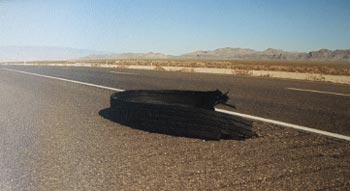 The last excitement was still awaiting us - finding "Dollar-rent-a-car" at the airport. The only sign said "44th north exit". Fine, we found that, but what else? No sign here or "Dollar" near by. We asked an employee, had 3 "attack runs" toward 44th but to no avail and were running out of time. We had to do something ASAP. Uwe was waiting in the car, while I jumped out to get a taxi as a guide. Americans cabbies - that's a special species of their own. I tried to explain my problem and in no time a major tumult was going on...
- Naw, A'm not gonna do it.
- 25 bucks!
- Aw don't know where it is.
- 25$ 25$!
I was trying to negotiate for $ 15 and finally choose a cabby for 20 that looked more trustworthy than the rest of the bunch. He was a Turk that won his green card in the lottery and was living now for ten years in the US. For another ten bucks he took us back to our terminal. No a bad pay for a few minutes driving around the blocks.

The rest went on more or less by the numbers.