It was an old wish of mine attending an American comic convention. Although, this wasn't the only reason why I went to the "Windy City" in early August. Visiting local Blues Clubs and walking on the tracks of legends like Muddy Waters and Howling Wolf, the opportunity to hang out with James and Matt Busch added to the decision attending the Wizard World Con in Chicago. So I could combine the useful with the nice things. 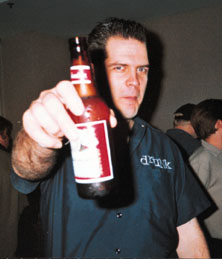 During my stay in Chicago, the Star Wars exhibition Magic of the Myth was in town. But my attempt failed visiting the show. It was sold out. Though this wasn't too tragic. I've seen it already two years ago in Washington and took dozen of pictures. Instead I took a look at Sue, the T-Rex skeleton.

Judging North American comic events from an European point of view, they're no "pure" comic cons, but pop shows with actors, wrestling stars, Playboy bunnies of times long past and other attractions of the media world. You seldom see any of this on continental European cons. Also, there aren't any exhibitions with original art and often editors in Europe have to face an audience criticizing their publishing policy or "round table sessions" with all major publishers discussing the current market situation and future outlooks.  The additional program at American cons are more like PR  shows for the publishers and polite Q & A sessions. Don't get me wrong! I'm not complaining! I'm only trying to explain the different approach between American and European cons. I knew all this before. I made the trip across the Atlantic to experience this difference first hand and to discover new things.  I've lost interest in most American mainstream books. Therefore I was attracted more to the small press and independent publishers instead of the "global players". Publishers like Top Shelf Productions and their touching book Good Bye, Chunky Rice. This was a discovery I enjoyed a lot.

What the hell, got this to do this Star Wars, you're asking? Nothing... of course there were some Star Wars related things happening at the con. First of all, the Men Behind The Mask tour had their tables in the center of the Wizard World. This time represented by David Prowse (Darth Vader), Jeremy Bulloch (Boba Fett), Garrick Hagon (Biggs) and Peter Mayhew (Chewbacca). The MBTM tour are tramping from con to con for years now. I guess, there isn't a spot in the western hemisphere where they haven't been. Wearing no mask in Star Wars, Richard LeParmentier (Adm. Motti) had his own table signing photos. And Ray Park (Darth Maul) had no table at all. He doesn't need one. With only 25 years and three movies (Ep.I, Sleepy Hollow and The X-Men), he has become the darling of the fandom. During his Q & A session, he made an honest and open impression on me. It's nice to see "fresh stars" in this business, that still are truly amazed about their sudden fame. 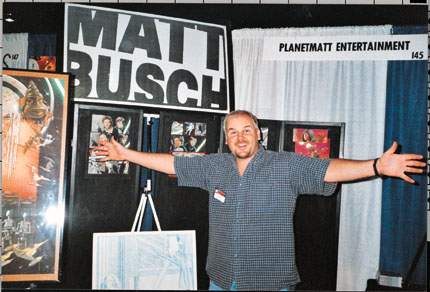 A frequently visited booth was the one of Matt Busch, who finally made the jump out of the Artist Alley Ghetto into the area of the big ones - even though it was only opposite of a greasy snack bar. He displayed many of his Star Wars work and was quite successful doing so. Matt sold his triptych concept for the Canadian Ep.I release and all of his Chewbacca paintings to Peter Mayhew! He had the pleasure hanging out with Peter and his wife, Angelique, at the Wizard World. To quote Matt: "The death of Chewbacca is a very emotional piece and no one deserves to have it hanging in their home more than Peter himself."

After the show we all went to enjoy happy hour at the hotel. Two hours of free alcoholic drinks. Mary Jo warned me not to get into a bar brawl with James. But he behaved properly and caused no problem. We joined a group, that were buddies from Matt. "Ring-leader" of the gang was that guy from Pittsburgh, who organize the cons there. I didn't now him, nor do I know his name. He dragged us into this noble restaurant with a receptionist at a desk. You could watch the cook preparing your dinner and utter wishes. It was a little bit like Blues Brothers dining with a bunch of comic geeks in a first class restaurant. I already saw my credit card melt away by those prices, but that "Pittsburgh-guy" paid for everybody. He even paid the bill for everybody again the next day. Wow, that must have cost him a fortune! He saved me a lot of money and I don't even know his name.

It's easy to waste your money at cons, not only in restaurants. Prime directive is to compare prices and stay cool. This is easier said than done. With an incredible effort of self-control, I managed to stay in budget. Beside of a few gap-fillers and new releases, I bought many Silverage Spider-Mans and the beautiful Katchoo bust from Strangers in Paradise.

The Wizard World Con certainly wasn't my last American convention, but with the current exchange rate, a return to the US won't happen happen so soon again. The outlook of new discoveries, personal experiences, rare collectibles and meeting fandom buddies will always make a pilgrimage to the places of American pop culture worthwhile.